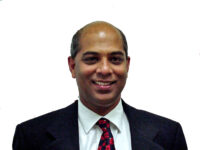 Dr. Chris H. Senanayake was born in Sri Lanka and received a BS degree (First Class) in Sri Lanka. After coming to the United States, he completed his MS at Bowling Green State University with Professor Thomas Kinstle in synthetic chemistry. He obtained his Ph.D. under the guidance of Professor James H. Rigby at Wayne State University in 1987 where he worked on the total synthesis of complex natural products such as, ophiobolanes, and completed the first total synthesis of grosshemin in the guaianolide family. He then undertook a postdoctoral fellow with Professor Carl R. Johnson and worked on the total synthesis of polyol systems such as amphotericin B and compactin analogous, and the synthesis of C-nucleoside precursors.
In 1989, he joined the Department of Process Development at Dow Chemical Co. In 1990, he joined the Merck Process Research Group. After 6 years at Merck, he accepted a position at Sepracor, Inc. in 1996 where he was promoted to Executive Director of Chemical Process Research. In 2002, he joined Boehringer Ingelheim Pharmaceuticals. He served >14 years as the Vice President of Chemical Development at BI and led a group of highly talented scientists, engineers, and Administrative staff located in Ridgefield, CT. In 2018 June, he joined AstaTech BioPharmaceutical Corporation as the CEO where he oversees all subsidiaries including AstaGreen Chem Inc., in Richmond VA as the CEO. In 2019 October he became the CSO of TCG Lifesciences and foundered TCG GreenChem Inc, in US as the CEO. He was also appointed as president of Astatech biopharmaceutical. Dr. Senanayake’s research interests focus on the development of new asymmetric methods for the synthesis of bioactive molecules and heterocycles and on catalytic, enzymatic, and mechanistic studies. He has published and lectured in the area of practical asymmetric synthesis and many disciplines of organic chemistry how to develop drugs on an economical, greener and practical manner in large-scale operation for rapid development of drugs. He is the co-author >400 papers, book chapters and review articles, and more then >100 patents in many areas of synthetic organic chemistry, drug development and design of improved chemical entities. Dr. Senanayake participated in many drugs development activities such as, Crixivan, Lunesta, Jardiance, Formotorol, Desvenlafaxine etc.
Dr. Senanayake demonstrates the ability to define and optimize chemical research and development strategies and tactics. He is able to “connect the dots” between the purely scientific and commercial perspectives and set up creative and effective strategies for new and proprietary products in ways that build value for the organization and create a competitive advantage. He is an Editorial Advisory Board member of the Organic Process Research & Development Journal. In 2008, he was the chairperson of Stereochemistry Gordon Conference. In 2010, he received the prestigious Siegfried gold medal award for development of practical processes for APIs and Process Chemistry. In 2011, He was appointed as an editorial board member of the Advance Synthesis and Catalysis Journal. In 2012 He was appointed as an Advisory board member of the Asian Journal of Organic Chemistry. In 2013 he was appointed as a Board of Editors for Organic Syntheses. In 2016, he joined as an IQ board member. In 2017 November, he was appointed as an advisory board member of Beilstein Journal of Organic Chemistry. In 2017, he was appointed as the Board of Director of CURE (connecting Connecticut’s science community)