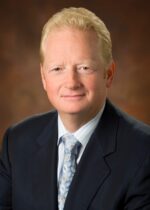 Dr. Joseph D. Armstrong, III graduated from Pfeiffer College in 1982 with a BS double major in Mathematics and Chemistry and a minor in History. He then went on to obtain his Ph. D. from the University of Colorado at Boulder in 1988 under the direction of Professor David Walba and did his post-doctoral work at the University of Virginia at Charlottesville under the direction of Professor Robert E. Ireland.
Dr. Armstrong joined the Process Research Department at Merck & Co. Inc. in Rahway, N.J in 1990 and has held many varied roles with increasing levels of responsibility. From 2001-2004, Joe was the Early Development Team Co-Chair (charged with developing the integrated strategy to transition a compound from Discovery into Clinical Trials) and led the Process Research Development Team that designed, developed and implemented the manufacturing process for the active pharmaceutical ingredient (API) in Januvia TM. Januvia is a treatment for Type II diabetes and is currently marketed in >100 counties and generates >$6 billion dollars a year in sales. In 2005, Joe took on an international rotation in the UK for 2 years with Merck in the Pharmaceutical Research and Development Department focusing on formulation research. In 2007 he was promoted to Senior Director and managed the sites in Canada, UK and Japan for Process Research. He returned to Rahway in 2008 and led the group of Project Chemistry, responsible for all API deliveries from enabling toxicology studies, through Phase I to Phase III clinical trials and subsequentially to file an NDA. Dr. Armstrong also led the Basic Pharmaceutical research group which was charged with leveraging pre-formulation and process research scientists in addressing liabilities for identifying pre-clinical candidates. Building upon this knowledge, he was tapped to be the Preclinical Sciences Lead, which included Safety Assessment, Process Research, Formulation, Drug Metabolism and Phase I clinical trials, for both companies, Legacy Schering Plough and Legacy Merck. He was charged with integrating the two companies, to develop strategy, organizational design, new work flow processes, vision and culture for the new Discovery and Preclinical Sciences Department. In October of 2010, Dr. Armstrong rejoined Process Chemistry as an Executive Director, leading scientists in the Discovery Process Chemistry Department, the RNA Therapeutics Department and the Structure Elucidation group. In 2016 Dr. Armstrong took on a new role as Executive Director in Project Management overseeing Companion Diagnostics, the Oncology Phase I pipeline (21 NCE’s) and Oncology Translational Medicine Biomarkers for all drugs to be used in combination with Merck’s leading oncology drug, Keytruda. Dr. Armstrong finished his career at Merck developing a comprehensive chemical management system for the entire corporation from “cradle to grave” for all chemicals ranging from target identification to commercialization.
Currently Dr. Armstrong is Executive Vice President of TCG GreenChem as Global Head of Research and Development and Head of Business Development for US/EU.
The Process Research Development Team for JanuviaTM was awarded the Solvias Prize in 2004 (Basel, Switzerland), the IChemE Aztra-Zeneca Award for Green Chemistry and Engineering in 2005 (London, UK), the Presidential Green Chemistry Challenge Award in 2006 (Washington D.C.) and the Prix Galien Award (the highest award given for pharmaceutical research and is considered to be the “Oscar” equivalent) in 2007 (NYC, NY). In 2005 Dr. Armstrong was chair of the preeminent Gordon Research Conference on Natural Products. Dr. Armstrong was awarded the Thomas Alva Edison award in 2008 for his patent on the asymmetric hydrogenation process for the preparation of Sitagliptin, the active ingredient in JanuviaTM. In August of 2010, Dr. Armstrong along with two other chemists at Merck were presented with the ‘Heroes of Chemistry’ award (Boston) by the president of the American Chemical Society. Dr. Armstrong has more than 40 publications, over 70 invited lectures around the world and 12 patents.